Within 2 weeks I delivered a tested MVP prototype to demo to investors.

Within 3 months, working along with a top-notch iOS developer, we were able to deliver a native-coded Swift iOS application in Apple’s TestFlight environment.

Music creators are creating more than ever. This is quite evident with thousands of songs being submitted to various music streaming platforms each day. The problem is, creators often aren’t able to properly protect their work. Without proper documentation, copyright registration, and performing rights organization registration, creators risk losing out on royalties. The Los Angeles, CA based startup Music Being Made wanted to create a new platform to help creators protect what belongs to them.

The client wanted to get the project up and going quickly, so I setup a Design Sprint, a short 4 day process with the goal of validating the initial concept and solving design challenges through prototyping and user-testing. This project happened during the initial heat of the COVID-19 Pandemic, so this meant doing a completely remote design sprint. We used tools like Miro for collaborating, Notion for housing research/analysis and Lookback.io for live/moderated user-testing sessions.

At the time we began the project, there were no direct competitors trying to accomplish everything that Splitz would. We did find that there were a few mobile apps and web applications that accomplished a few of our functions, but not all of them. However a few months into the project, we found out that a well-established independent music distribution service was planning to release a mobile application that would likely include features we were building.

My research included getting a thorough understanding of existing products & services along with their audience, usability, structure, and design. We analyzed numerous user reviews and feedback requests to get an idea of what music creators really needed. I found that many people suggested the same features, features that were not yet readily available in many applications. We also gathered a group of people with various roles in the music industry including: Music Artists from various genres, Producers, and songwriters.

After analyzing the initial data, I created personas to define the groups of individuals we’d be targeting. This better equipped me to understand who our users were and how the Splitz mobile app could alleviate pain points and help them accomplish their goals.

The client presented me with mid-fidelity screens that had been completed by a previous designer in Adobe Illustrator. I imported the screens, made a few updates, and created a clickable prototype using Adobe XD. I made 2 versions of the app to test different navigation structures, so one group would test an “A” version and the others would test a “B” version.

Once the prototypes were ready I prepared a Usability testing plan, scheduled the testing sessions with 5 people per version and performed live moderated tests using Lookback.io. After completing the tests I compile a report showing where users were having issues and suggestions to improve the overall experience. 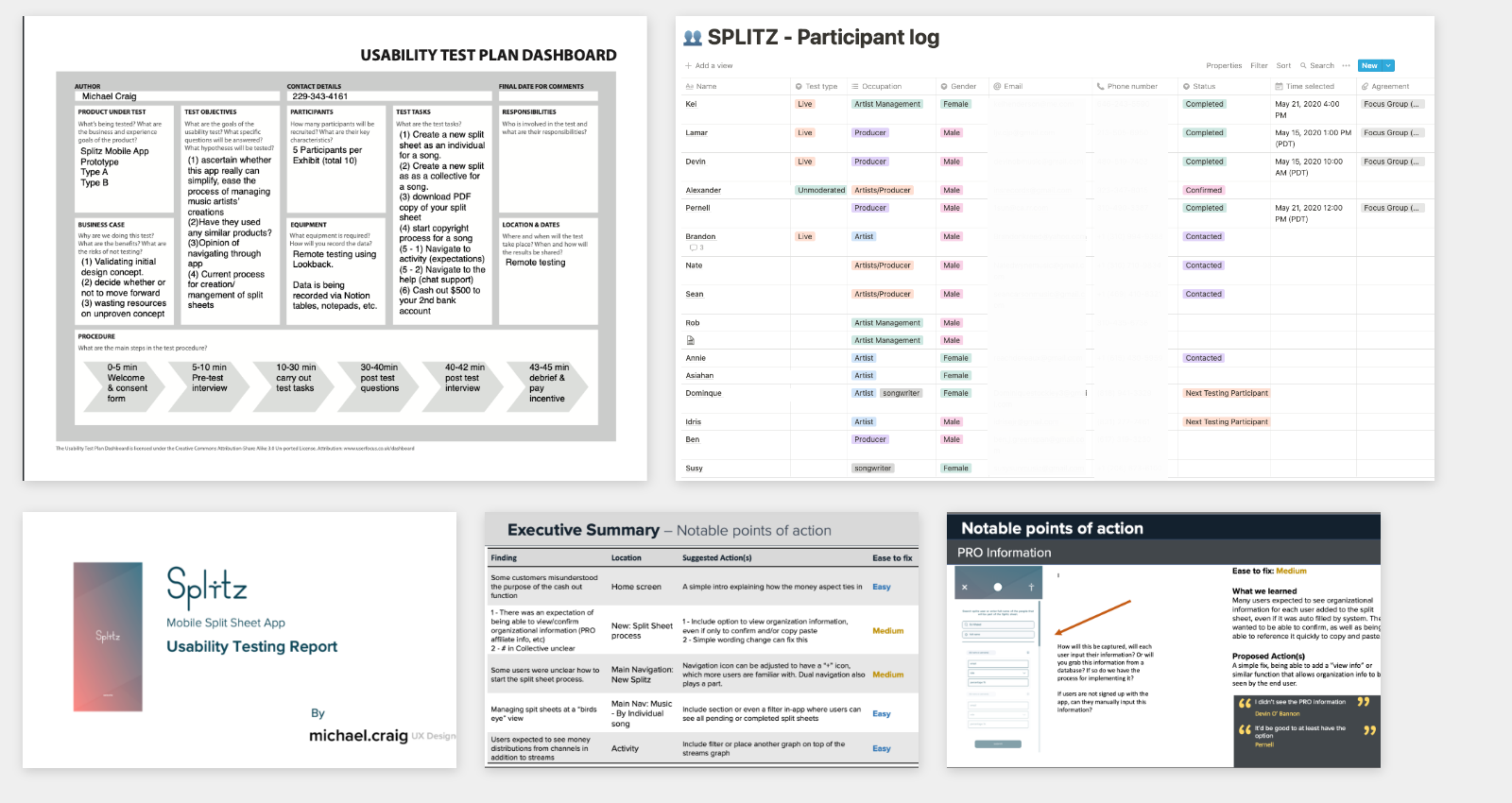 After the 4-day sprint, we moved on to the next steps suggested in the report. I redesigned a number of screens, implementing suggestions made in the usability test report. I also started the design system to house all of the main colors, typography and components. After producing the MVP, I worked with Stefan, iOS Developer to bring the design to fruition. We worked together for about 3 months to get the first version to Apple’s TestFlight application before going into the App Store. 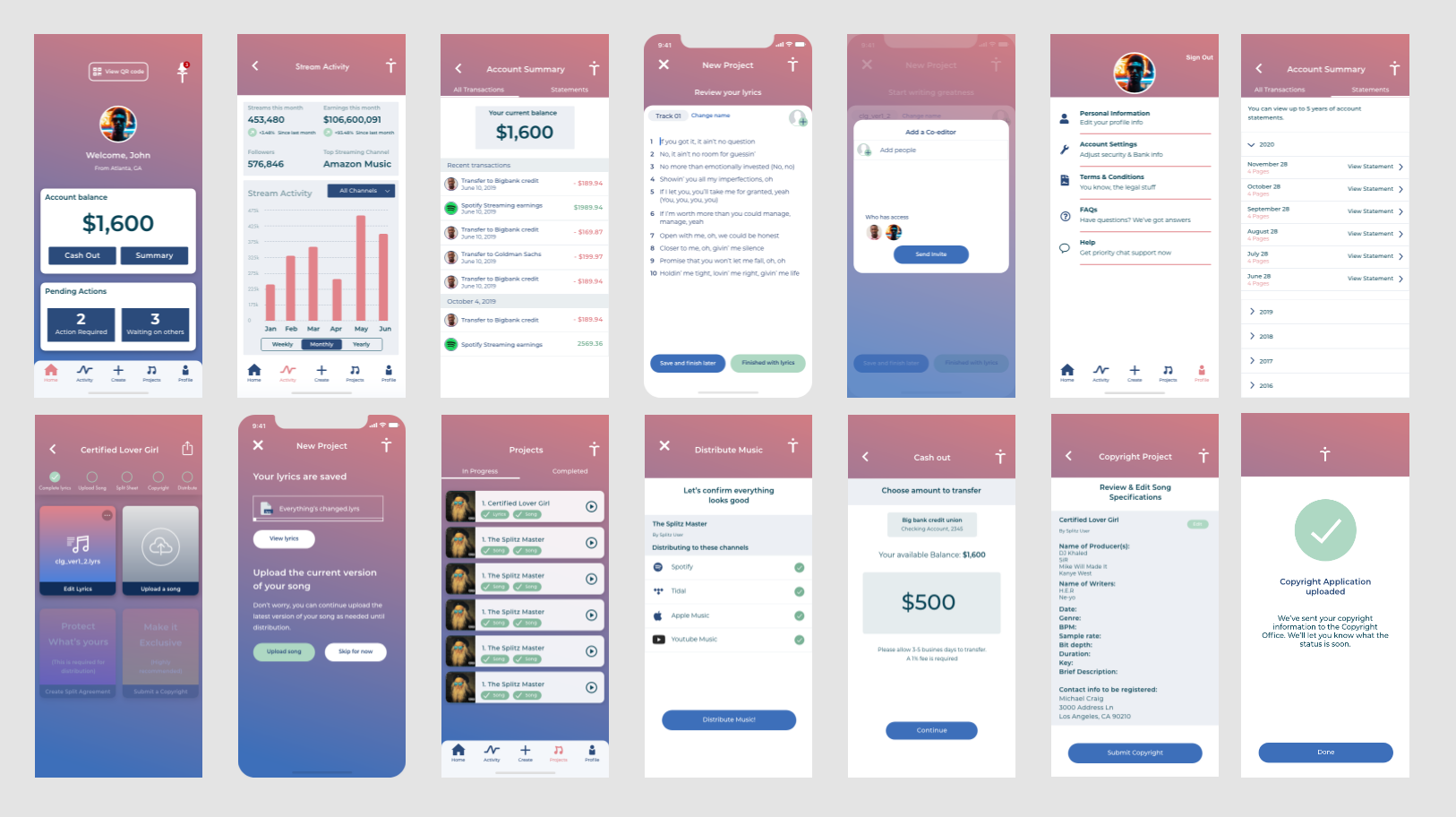 Read the next Case Study.